Difference between revisions of "User:Sadeep/DevLog-2020"

Downloaded Qt, Visual Studio C++, cloned (or whatever it is called in svn) the BRL-CAD source code.

Fixed the errors that came up and built BRL-CAD from source on Windows, VS2019. Several bugs still remain. A debug assertion failure happens in pix-bw.exe. But I guess this won't affect my project in any way. The builds still take a long time. I guess this is because everything is compiled everytime.

I looked at the possibility of using NMake to build BRL-CAD for Windows because it would not take long as building with VS (CMake was lot faster when I was doing in Ubuntu last year). Also I need to configure CLion instead of VS.

CMake generates the NMake project successfully. But NMake does not work well. It gives an error when building TCL and TK projects. I was changing various stuff and tried to see if it succeeds.

Changing CMakeLists files of tcl and tk modules and a change to corecrt_io.h in windows 10 SDK made the errors with NMake disappear. Archer does not work. Debugging Archer displays that it crashes saying tkhtml.dll not found. Also I was trying to find a bug to solve as the patch Sean asked for. Looked at https://sourceforge.net/p/brlcad/bugs/385/. Followed some Qt videos.

I was thinking the only command line way of building using Visual Studio was via NMake. I realized that I can build via the Visual Studio IDE's native way by setting some arguments in CMake. Also realized that the build times were long when building with VS IDE was because I built ALL_BUILD when I should have built only the target I changed. Configured CLion to use VS IDE's tools to build. Everything is working now.

Worked on the patch Sean had asked for. The Create new file in MGED had a bug. It was saving without the .g extension even though .g extension was selected in the Create New dialog box (at least on Windows). I tried to debug this. I realized this was a bug (or a unusual behavior) in Tk framework and cannot be by changing BRL-CAD code.

Then I started to create the feature to open recent files in MGED.

The patch can be found here. https://sourceforge.net/p/brlcad/patches/542/

I did not do anything related to the project.

Qt is using qmake to build by default. But can be configured to use CMake too. I encountered several issues when trying to configure building Qt applications with CMake in Windows. I fixed those issues and built a Qt based project with CMake.

However this does not still display the nested objects. Added keyboard shortcuts for menu item actions.

Replaced QGLWidget with QOpenGLWidget for displaying geometry and fixed the bugs that came up.

Readability improvements (Moved .h files to include directory. Made the CMakeList.txt file clear.)

Created the GitHub repository and pushed everything.

I was struggling to get elements from the VectorList class. Iterator has a very weird syntax. After hours of googling I could finally print the values from a VectorList. Had to create a separate class just to do the iterating (VectorList::Iterate). I'm not sure if I'm doing this correctly. Can't still get the elements to a list without using something like global variables since local variables are not accessible within the class I created for iterating.

Started rewriting the display manager since I anyway will need to change it to make compatible with the VectorList.

Rotating with mouse. Currently configured to rotate by dragging with middle mouse button.

Moving (perpendicular to the camera direction) with mouse. Currently configured to move by dragging with right mouse button

Implemented making the cursor (mouse) jump to the other edge when it passes the boundary of opengl display while doing the above operations.

Implemented the class Document which holds information about a single .g file opened in the editor.

Implemented support for multiple documents. Several .g files can be opened and worked with now.

Struggled to get the elements from VectorList to a list. (later found out that this was not possible and was not the intended use of VectorList)

Worked on the DM

Minor Bug fixes. Opening file via QFileDialog::getOpenFileName did not work when QMdiArea is in subwindow mode rather than tabbed. (For the screenshot yesterday I had to hard code file paths & open them in opening).

Replaced the objects list with a tree view (I reused the code from rt3 / QtGui).

Studied the Cameras in g3d. It appears I will have to study the logic and implement the cameras (rather than reusing the g3d code) since they use ORGE.

Added a style sheet through RC. UI improvements (mostly experimenting various things I can do with style sheets)

It turned out to be significantly faster.

I was playing around with the code by placing breakpoints in the code of these libraries while doing stuff in archer.

Cloning and setting up qtged branch. Tried to get qged target to build, failed.

Removed the C like vlist rendering since BRLCAD::VectorList::Iterate is now fast enough with Display lists implemented.

Implemented line styling (setLineAttr in dm and deciding style for each solid). Dashed lines are plotted where necessary now.

Ported my DM to the qged project in the main repo. Most of the things had to be changed since my implementation was on top of coreinterfaces and the main repo didn't have access to coreinterfaces. So I rewrote it to rely on the C methods.

Restructured the code (which is now in main BRLCADrepository / qged) to seperate the raw OpenGL commands to a new DisplayManager class which is analogous dms in libdm. The plan is to implement methods in dm-generic.c in this class as needed.

Fixed the bug which prevented the wireframes from not being drawn in starseeker's machine. After a lot of searching I realized that doing OpenGL operations in Qt SLOT call cause the bug.

Installed Ubuntu, configured the environment and built BRLCAD+my project on a virtual machine. (this was done to simulate starseeker's environment although it would help me in the future to check cross platform support)

Changed my project code in the RT^3 repository to account for to reimplement the changed made to the code in qged. (see 28-29 June 2020)

Implemented methods into GeometryRenderer to utilize the functions I implemented in coreinterface for drawing the database.

I realized the coreinterface already had a way to support iterating the database. Discarded the code I implemented and studied the existing methods.

Implemented methods into GeometryRenderer to utilize the existing functions for drawing the database.

Removed all references to internal C pointers from the codebase.

Changed all occurrences of auto keywords to the corresponding type.

Implemented destructers and properly freeing of memory in all necessary the classes (I had not done this earlier).

Converted pointers to references where possible for readability.

Seperated UI files in the project structure for readability. Switched to manual UIC from AUTO_UIC.

Implemented close button into menubar (with on hover/press UI changes)

It looks with the title bar removed. But Now I can't resize / drag the window at least on Windows.

Replaced MDI with a tabbed interface.

Created a preprocessor for QSS to support variables. Color scheme mapping is stored in a seperate *.theme file now.

Seperated logic for dock widgets into a new class 'Dockable'.

Made the UI compatible for multiple screen resolutions and scale levels.

Scrollbars styles to look better and be more space efficient

A lot of experimenting in the Stylesheet for everything in the list above.

Learning about fonts and using them in Qt. 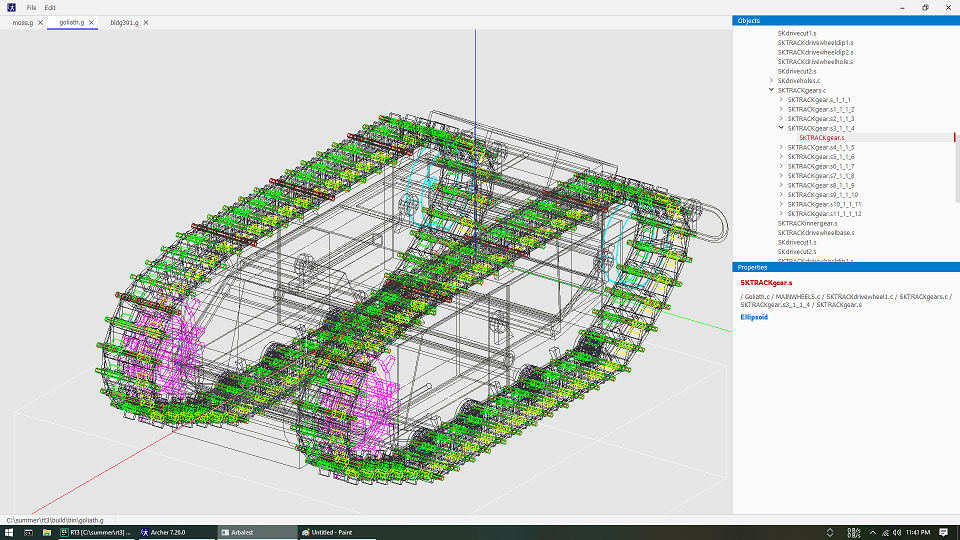 creating a table widget since build in is bad.

Display property values and editing them

Removed menubar and statusbar from .ui and added it to the C++ code.

Removed the main view from .ui file. Removed the use of .ui files and removed UIC from cmake. Everything is in C++ now.

Changed the logic for object rendering to utilize ObjectaTree.

Center view around a single object.

Multiple viewports for a single document.

Designed an icon for Arbalest in Illustrator.

Did some performance evaluation by measuring execution times and changes some stuff based on the results.