Currently very close to having old g3d running within a logical Qt Application and an actual Qt window.

Much has happened since last log. In summary, OpenGL embedding is now functional, and after some work the GUI has been restored to original G3D functionality and can be seen following. 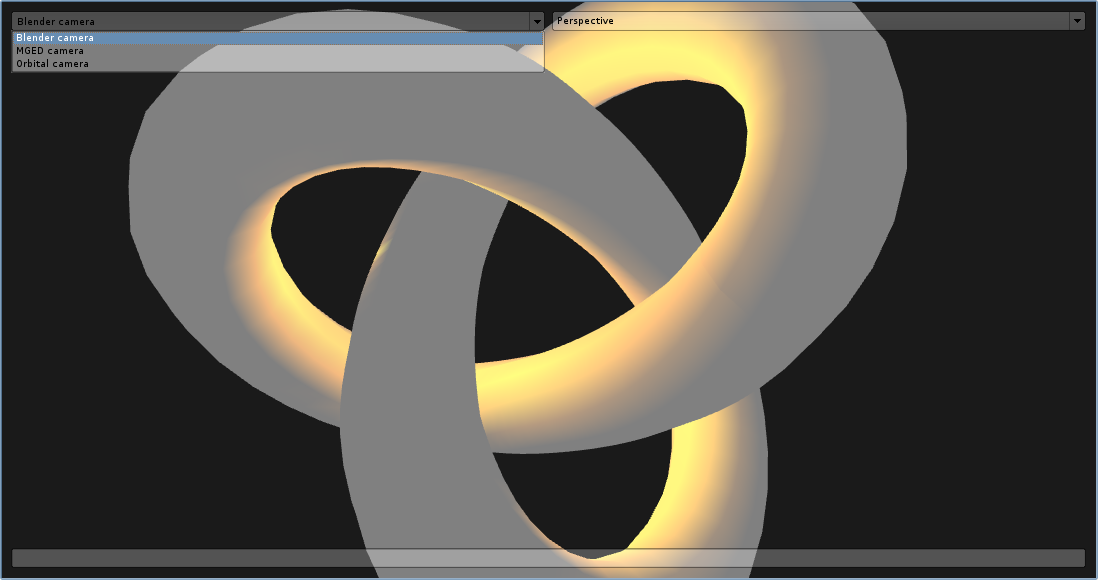 I propose to continue the development of the OpenGL Geometry Editor GUI effort began during Summer of Code 2008 through modifying the existing application to take advantage of the Qt application and UI framework and then taking advantage of the wide array of development tools, widgets, and libraries offered by the framework to rapidly flesh out the front end, with the ultimate goal of preparing a powerful and intuitive CSG modeling GUI ready for connection to the geometry service.

BRL-CAD is unparalleled in power and maturity in the small world of open-source CAD, and has a feature-set capable of competing successfully with commercial CAD products. However, the suite has until recently, as an in-house tool, been targeted almost exclusively at small population of trained experts. As such, the current standard modeler, mged, is highly unintuitive, requiring extensive perusal of documentation before even relatively straightforward modeling tasks can be completed reliably. To make BRL-CAD a useful and attractive toolset for a wider audience, it is therefore critical to implement a more intuitive GUI without sacrificing the power offered by mged.

As a well-recognized need, this project was first addressed in a 2008 Summer of Code project which produced the beginnings of a working prototype based upon Ogre and RBGui. While it provides an attractive beginning, it lacks any actual editing interface, and suffers from limited potential for direct growth as a result of the selection of RBGui, which is unmaintained (to the extent that I found it unbuildable on Linux without numerous modifications), has a limited selection of widgets, has no design tools or other development aids, and lacks much of the higher-level functionality that can be found elsewhere. To remedy this, I propose to within the existing codebase swap out RBGui with Qt, an extremely powerful, well-documented, and widely-used application and UI framework, and is well supported on all remotely popular platforms, and popular itself to the extent that up to date binaries for it exist in most package management systems, offsetting the admitted problem presented by the notoriously slow build process of the framework. Additionally, a wide variety of development tools exist, which have the potential to accelerate prototyping immensely compared to the hand-coded measures necessary in the current implementation. Although Qt is traditionally rendered in software, making it seem an odd choice for use within an OpenGL context as RBGui is currently used, Qt recently gained support for this type of use.

Once I have successfully integrated Qt with Ogre and substituted it for all uses of RBGui, I will work to continue the efforts made last year to develop it into a complete geometry editor frontend based upon the Ideal Operating Environment concept around which the work up to this point has been based. In particular, I will work to construct a framework for the rapid prototyping of a highly usable GUI composed of actions accessible through multiple routes, including the command line and multiple GUI methods, and leveraging it to form an interface with functions to perform and display a variety of common basic editing operations. Support for actually performing these operations will be implemented through stubs wrapping libged functionality, to be replaced with use of the geometry service as soon as it is practical. This will allow a degree of actual functionality sufficient to test the GUI design in practice, allowing for meaningful early analysis of the effectiveness of design decisions, which will support the direct evolution of the interface towards the greatest possible usability. Although the scope of functionality to be implemented will be inevitably limited by the time allowed for the Summer of Code, I hope to continue on with this project after the Summer's completion, as I believe strongly in the importance of such an interface to BRL-CAD's success, and the benefits such success has to offer to a diverse audience; as the sole example of high-quality open CAD software, bringing an accessible BRL-CAD into reality would not only benefit current users of such technology, but help make CAD accessible to those unable to afford the expensive licenses typically required for commercial options, potentially opening up a whole new world of open community-oriented design projects, paralleling with real-world products the massive success of open software.

To achieve these goals I will take advantage of my existing familiarity with both the BRL-CAD internals and the modeling interface (and power thereof) offered by mged, as well as experience with the popular Blender modeling and 3D graphics toolkit, the familiarity with C, C++, and many similar languages I've developed through years of self-motivated programming, and the familiarity with build systems, command line interaction paradigms, and diverse user interface designs conferred by regular use of Unix-based systems for both software development and everday tasks. Additionally, I will take advantage of my familiarity with the community, a result of my presence on IRC for most of the past year under the nick "Ralith," to engage with the current primary users of BRL-CAD for immediate feedback on my prototypes, in the interest of creating a tool that is not only attractive to new users, but powerful and intuitive to long-time users of the system as well.

August 2 through August 10
Review usability and intuitiveness of interface, taking comments from community and making optimizations