BRL-CAD uses simple material properties, presently limited to density, for calculating weights, moments of inertia and other geometric analyses by tools such as rtweight and gqa which rely on text files to gather material information. When computing weight,volume, regions are interrogated and associated with a material depending on it's GIFTmater id.

It would be more flexible to have (non-geometric) material objects that store properties and can be associated with geometric objects from a .g database and that can be used with the current set of BRL-CAD commands/tools.

The on-disk version of each object consists of three distinct parts: Object Header, Object Interior and Object Footer. Object specific data is stored in the Object Interior, either or in both Object Body or Object Attributes. Writing on disk is done by rt_db_put_internal() which inspects the handle on the internal format of a database object for the major/minor type.

Internal object specific methods are stored in the OBJ (struct rt_functab array). When building internal objects, the minor type is used as an index to point the right methods for that type of object. For now, material and shader objects are at the end of the OBJ array. 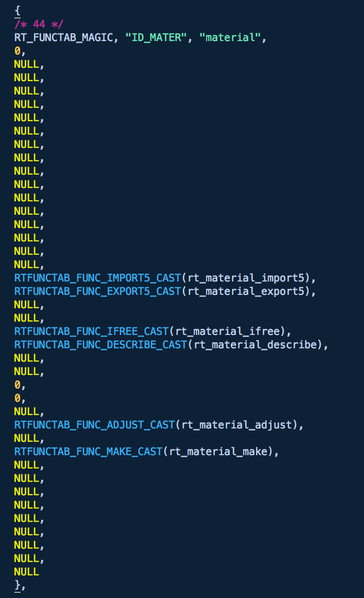 There should probably be a new array that stores just DB5_MAJORTYPE_ATTRIBUTE_ONLY object methods for the material and shader minor types.

Since low-level routines that handle object exporting, store internal attributes to the on-disk objects Attributes section it 'd be natural to store material properties in idb_avs. I was thinking it would be better if rt_material_internal would actually contain just a pointer to idb_avs and make operations on it. Right now, on my patch, rt_material_internal contains an bu_avs structure that's being copied to idb_avs when exporting.

To associate regions with materials the most sane way I could think of was to store the material object's name in one of the region's internal representation fields. When a tool (l/...) would want to inspect a region's material properties it would check the string (bu_vls) stored in the region's internal representation (rt_comb_internal) and perform a database lookup for the object with that name. rt_comb_internal already has a bu_vls field "material" which is not used anyways. If the lookup fails it means that the material doesn't exist (anymore). This is convenient because many regions can reference the same material object and this way changes to the material properties are "propagated" to all the objects that reference that material.

When raytracing is performed and tree state is built from combs (db_apply_state_from_comb), material object name is stored in the ts_mater field (struct mater_info). This way rtweight and gqa can perform db lookups for local material objects.

The rough submitted patch covers most of these details. If the feedback is positive on the implementation details the next step is to provide an API to modify material properties and make sure all tools work the new type of objects (e.g.: adding/modifying/removing properties attr or making it easy for a region to reference a material object using mater).

Another issue I want to tackle is binary attributes. Material properties are either float or double types and they're stored in bu_avs which can currently only map string to string. I've been following Tom Browder's work on this. He wanted each pair in an avs to be flexible enough to hold a different mapping. What I don't understand is the format that he wants/wanted to use to store the data: