Difference between revisions of "User:Mandeeps708/gsoc proposal"

I am a final year B.Tech. student of Computer Science and Engineering at Guru Nanak Dev Engineering College, Ludhiana, India.

I have always been passionate about programming. My work on various open source projects is briefed below:

For more details about my work, you may refer my GitHub account:

My knowledge of various open source technologies expands over

My main idea is to implement a plugin manager for FreeCAD that will be used to install/remove/update plugins and other unofficial workbenches or modules and macros. Besides, this project will make the life of the FreeCAD developers, workbench authors as well as the end-user easier.

There are many plugins available for FreeCAD and developers are creating more. So the task for getting pull requests, managing and merging them becomes a tedious task. Quite similar is in the case of macros. And it also makes the code base of FreeCAD a bit more or like bloatware to be delivered to the end-user. Efforts have been done by the FreeCAD developers to separate the installation of plugins from the FreeCAD software itself.

One has to do manual work for getting plugins installed on their system to be able to use them. So this project considers the issue and tends to implement an universal plugin manager that will manage the plugins and it will include the following:

As FreeCAD is having many workbenches/macros fully coded in Python so they can be imported, without any necessity of compilation. As the plugins authors have to go through the painful (and somewhat lengthy) process of Pull Request on GitHub to get their code reviewed and accepted. This project focuses on making the same process rather easier to get the plugins working at the user’s end, so that user can integrate designs modules into their projects as a plug-in with ease. So the main idea is to present a simple, intuitive and interactive user interface.

The problem with the existing system is that it’s currently using manual technique to get everything done i.e. it uses git submodules that have to be fetched manually every time a workbench/macro code is updated. Rather, it has to be automated.

Here is a prototype for the same: 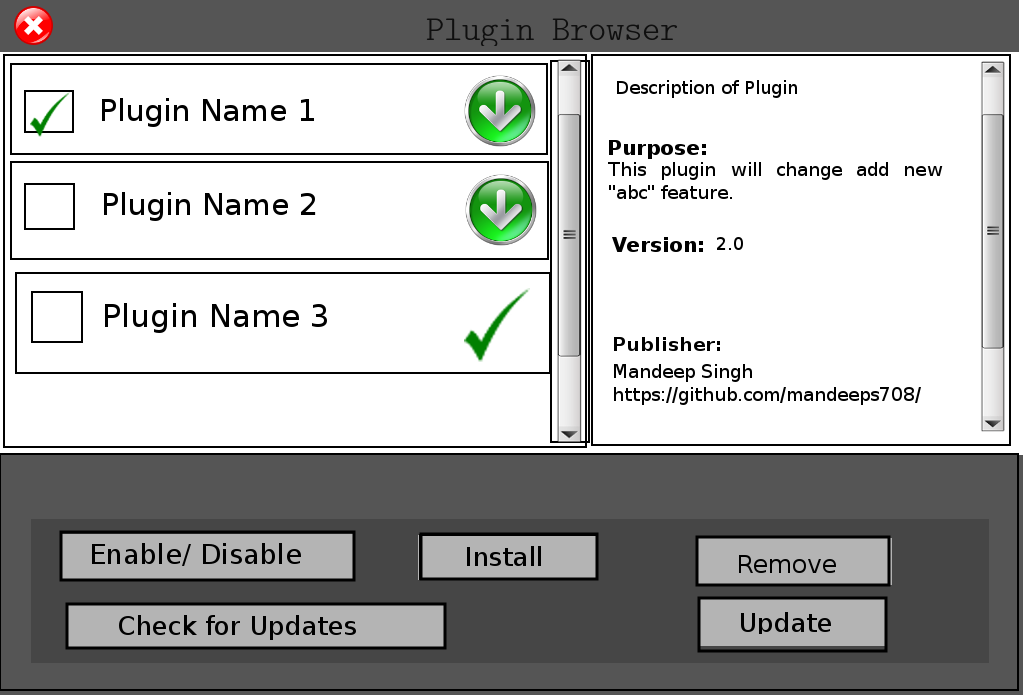 The structure of the plugin directory may go like this. Suppose there is a main plugin directory i.e. /usr/lib/freecad/Mod/Plugins/ and it contains two plugins “Plugin1” and “Plugin2”. Then each plugin will have some sub-directories (like images) or files (python modules). The tree structure will look like following:

Then the idea is to have a “Plugin detail file” that will reside in the plugin directory itself and will contain the following information:

So this is the file that will be looked for by the plugin installer.

I will be available 40 hours / week, if needed can spend more. No restriction of time.

I have always been fascinated by operating of CAD softwares. This project got my interest. It will provide me a great opportunity to work on a realistic project in collaboration with great experienced developers.

I found myself fit for this project according to my skill set and interest. I am very passionate to explore and learn new things. I understood well the workflow of this project. I want to work for FreeCAD organisation to gain more experience and enhance my knowledge about CAD. I will also be actively contributing and maintaining the code even after GSoC.