Difference between revisions of "User:Inderpreet/OGV Proposal"

I study in 4th year B.Tech (Computer Science and Engineering) at Guru Nanak Dev Engineering College, Ludhiana (India). I was introduced to this community about a year ago and have tried to help with whatever I could. I can write in C++, PHP, Python, Javascript.

When we built our initial HTML web pages in 90s we din't have an <img> tag. Just a few years back Video was a foreign element added via third party plugins. Today images,videos and audio all have become first class citizens of the web. HTML 5 has introduced many new members to the family. Canvas, WebGL and SVG being few of them. These technologies allow us to manipulate and access 2d and 3d graphics right in the browser. Today we have incredible power in our hands when it comes to handling graphics on web. Even with technologies like WebGL, 3D graphics have not yet become a part of our daily web experience. I believe in OGV as one of those platforms that will make sharing 3D models on the web as normal as sharing videos on youtube or images on flickr.

Online Geometry Viewer started as a GSoC 2013 project by Harmanpreet Singh. It's an online 3D geometry viewer that works on WebGL using three.js. It uses vanilla PHP on server side whereas jQuery and Bootstrap on the front-end. To give it a robust foundation, the community discussed about changing it's backend to something more powerful. I took an active part in that discussion and the community ended up with choosing node.js as a replacement for the current PHP based backend. After looking at various frameworks I decided to go for meteor. Reason for this choice is that meteor has a comparatively larger community which means more support, bugs are removed quickly and more code to learn from. So first step would be porting the current app to node js after that we can improve on previous features and add new features. I have prepared a list of improvements and features that I will add to OGV this summer.

Things that I will Improve on: -

The features that I will add: -

We have made a choice to move to node.js. Then there's a choice to be made among various kinds of frameworks, and then various frameworks in each kind. We decided to go with Full Stack frameworks like derby or meteor. I decided to choose meteor over others because it has a larger community i.e used and tested by more people as compared to others like derbyjs.

So My first task would be to replace each module of OGV to meteor. I have written about the details for each module in the sections below. Third party libraries in meteor can be added by writing packages for them. So one of the important tasks will be to either write a package or use existing package of three.js

After we have a sound foundation with node.js, now we can concentrate on improving the existing OGV features.

Currently in upload_file.php, a list of names of obj files is sent to model_display.php using GET method. We can send a very limited amount of data through Get method. Larger models fail to get loaded because of this limit. It's just an array of file names so I will use HTML5 local storage to store this array locally on the client and fetch it again from there.

This will remove the bug and also add all the speed and benefits that come by storing data locally. Few older browsers do not support local storage so for them we can use a polyfill such as amplify amplify.js. Fortunately meteor has a package called amplify, that does exactly the same thing.

No matter how much we hate errors, they are very important to the user. They tell something is wrong and they contain information about solving itself. Can they be any nicer?

Currently at some places errors are not given to user at all and at other places errors are not that explanatory. For example there is no error given if the user account folder is deleted, neither a remedy is taken to create the user folder again. Just the models are not displayed in model_display.php without any error or any indication of something that has gone very wrong behind the walls.

Then there's a case with configuration errors, if say mged path is wrong then there's a small error in the sidebar of the model_display.php. Which is not clear and also gives no cue to user about how to solve that error.

For other errors like mysql credentials, I believe bootstrap's alert class needs to be used, so that it looks like an error. It's half of a UX problem and half of the functionality problem. For configuration errors, I have submitted a patch to the official github repository.

As also stated in To do list of OGV, current Auth system is not that secure and lacks robustness. Meteor has it's own robust authentication system. Secondly, current auth system does not have user roles but we need at-least two kinds of users, admin and non-admin. Admin user must be able to edit configuration files, add remove accounts etc, whereas non-admin can not do such tasks. Following features of meteor are going to help me with this

And this all comes as one package with meteor.

There's a scope of improvement in current OGV Installation, and also as we grow we need in place some standard Installation mechanism so that any user without any prior knowledge to any programming can Install it easily. I am inspired from Wordpress' 5 minute installation or Anchor CMS's 2 minute install to bring in OGV it's own easy install. I have worked on the configuration part and submitted a patch regarding it.

I am passionate about creating good interfaces. More than eye-candiness I care for the experience that user gets. To make things easy for the user. Then the second part of User Interface design is about prompting users to take actions. To make sign up buttons that no one can ignore but click. I will use bootstrap as underlying framework which I will edit to customize it specifically for OGV. 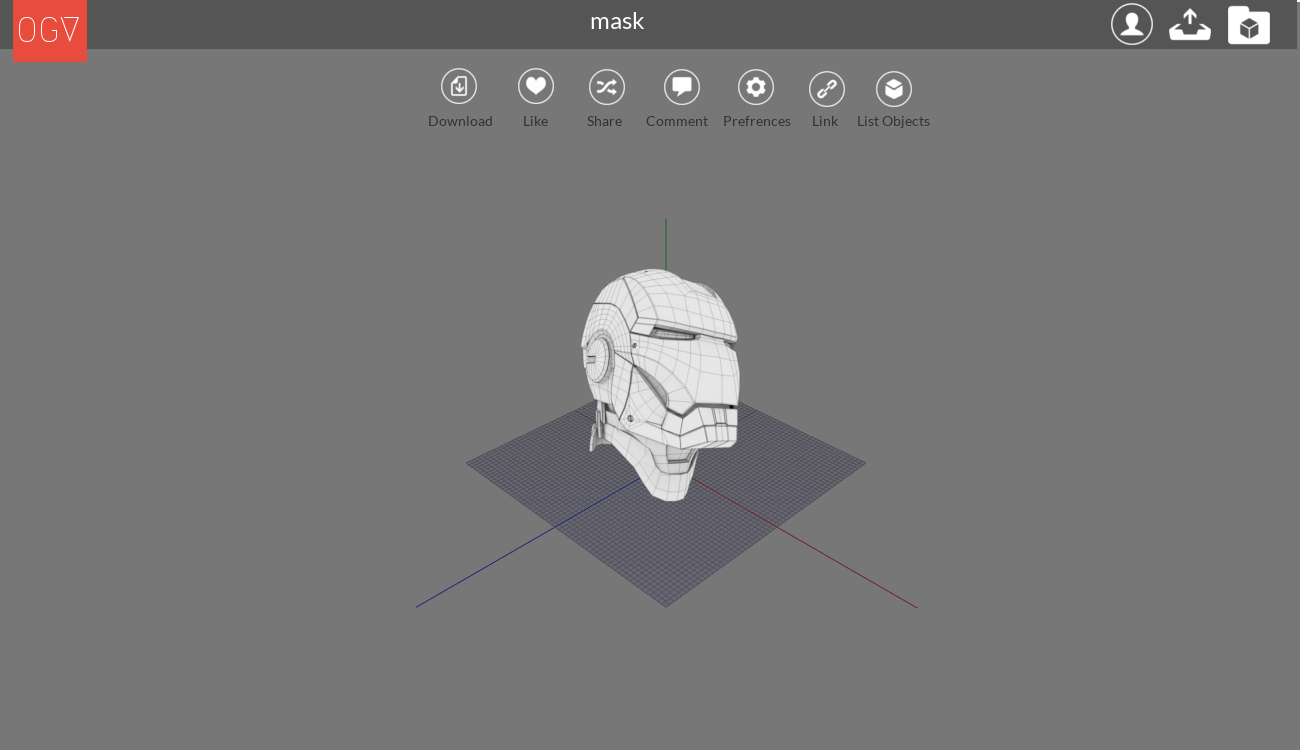 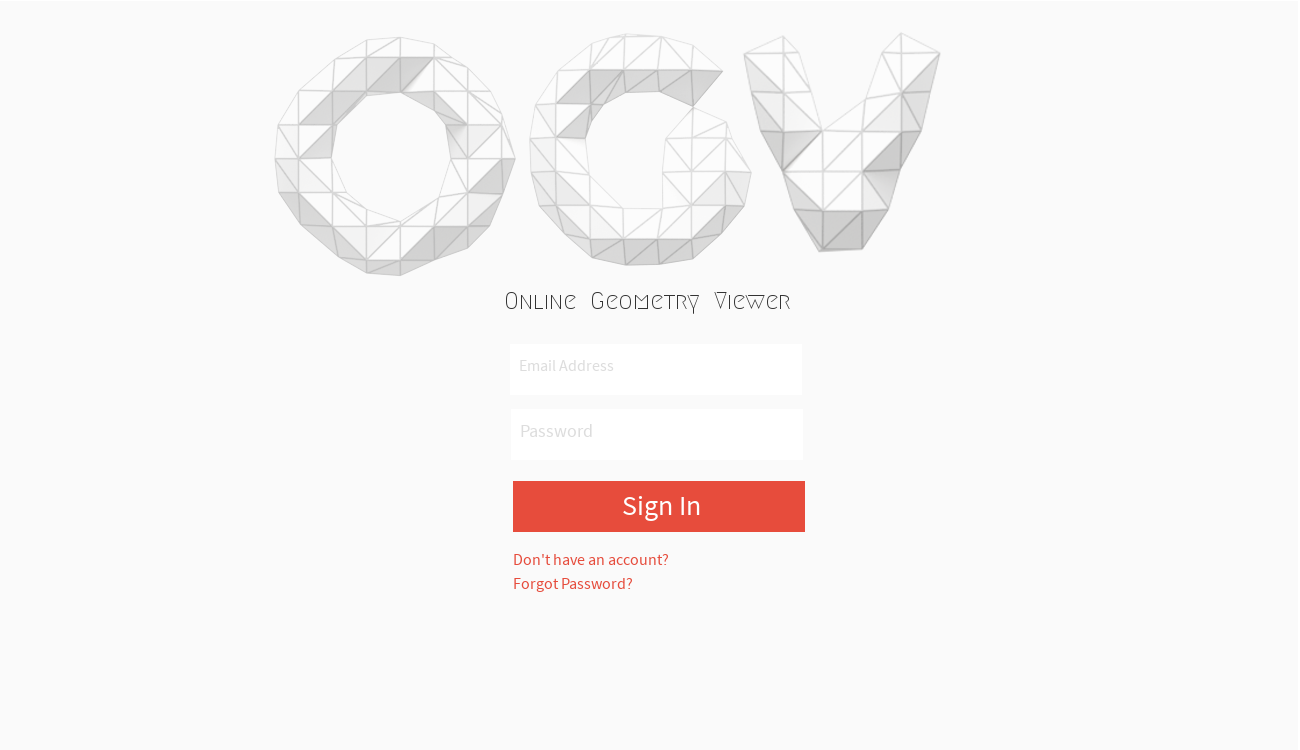 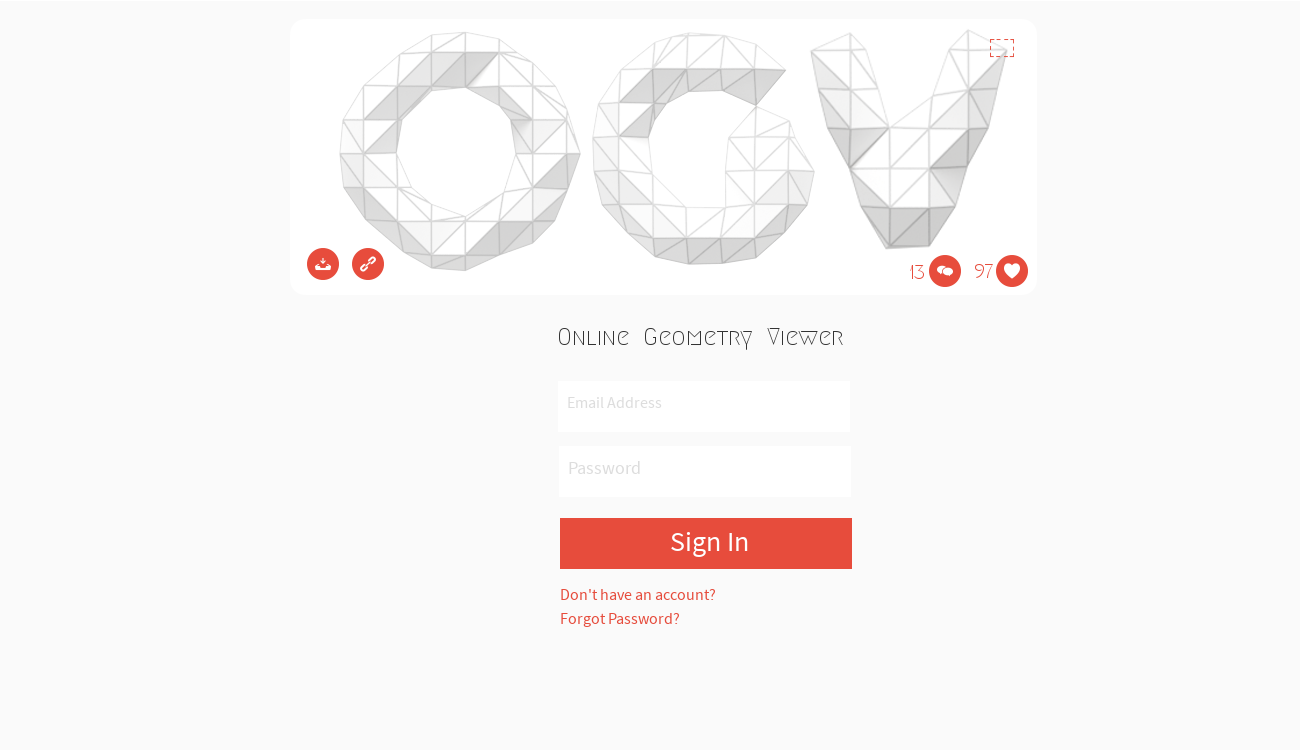 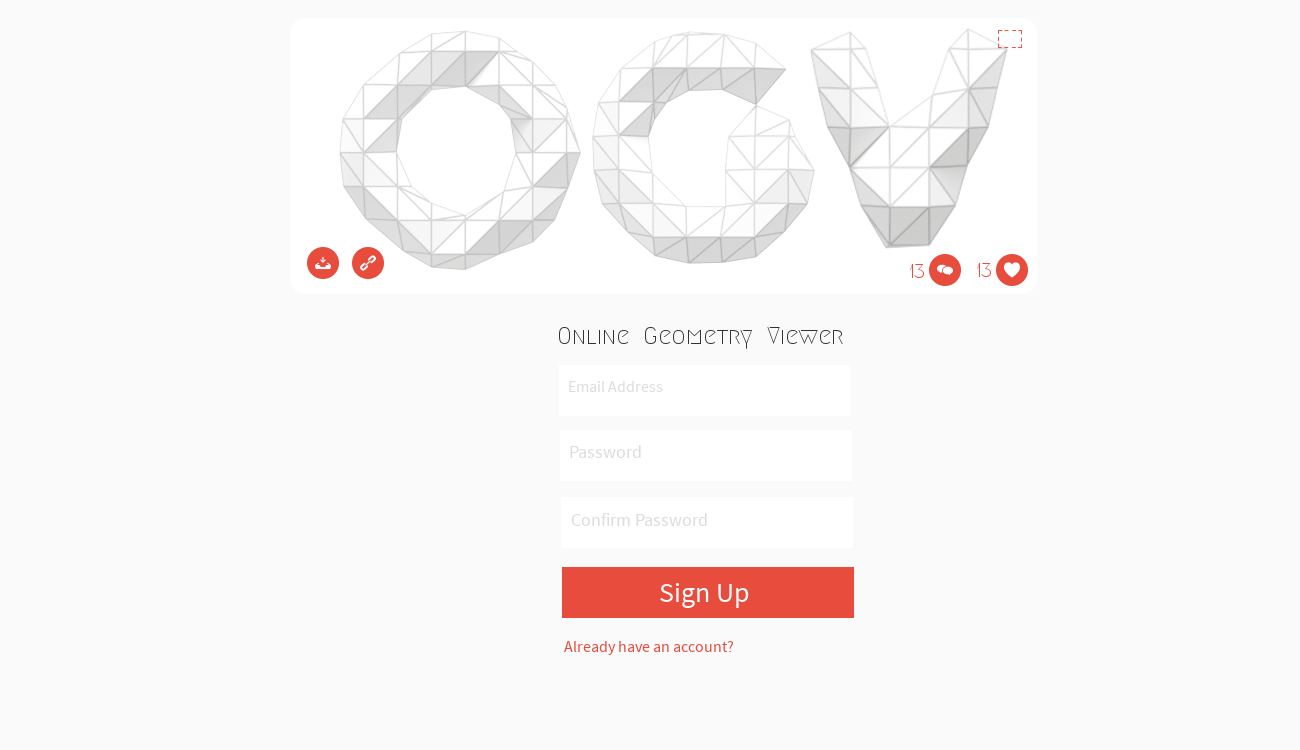 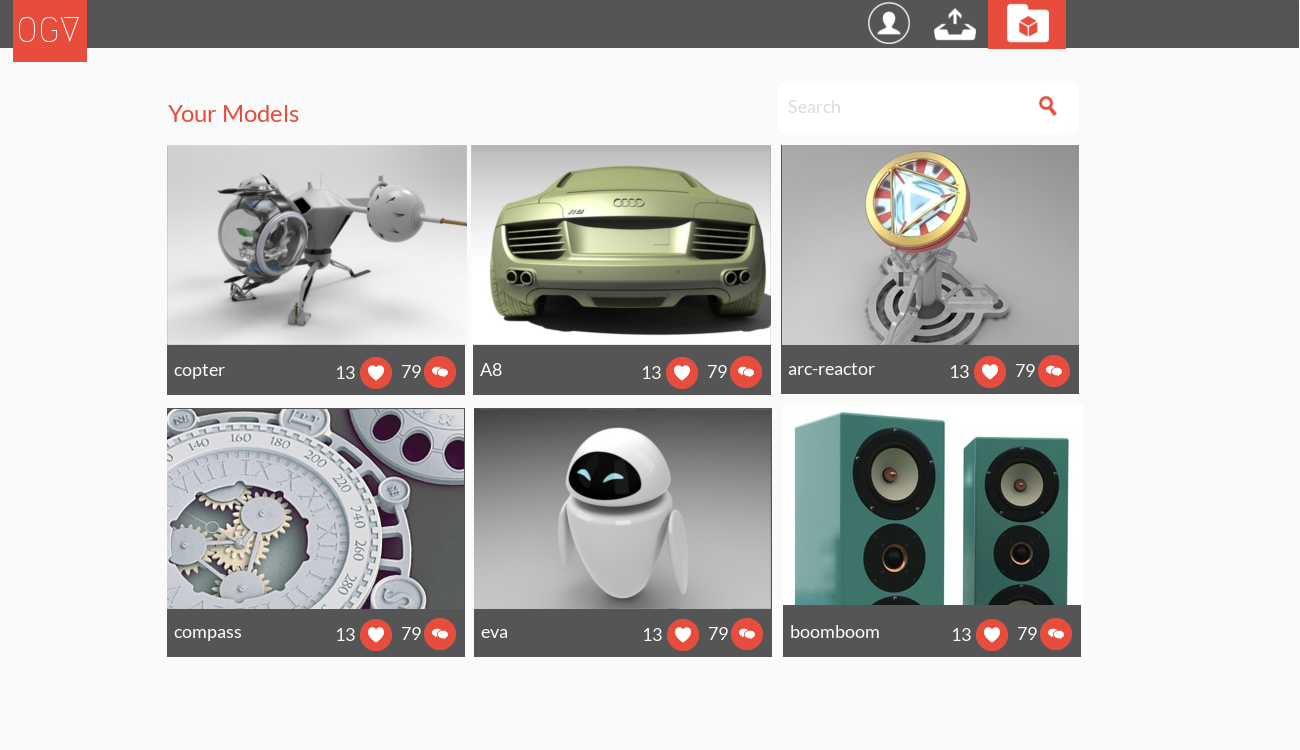 These are just the early rough mockups and not the exact design so it's not pixel perfect. I try to make pixel perfect designs using grids and various design prinicples. I have also not made a mock-up for each and every page as that would require more thought to be put into and more feedback from community. I have a good knowledge about

OGV's design will follow all these principles + look great.

New Features to be added[edit]

Currently we just have a upload button on the name of dashboard. I propose to add a full fledged dashboard where we can see all the models that we have previously uploaded. These dashboards will have options depending upon what kind of user you are. Admin user will have more options like Editing configuration files, adding/removing accounts etc. The rough list of what a dashboard will contain is as follows.

File uploading is a little tricky part with meteor. Firstly, meteor does not have any ready-made built-in solution as such for file management (way it has for authentication). I have looked across some packages for meteor js that can be tried, tested and customized to feed our needs.

Social element in OGV is I guess the most exciting part of OGV. The ability to like other's models and share them among users. To share them on social network websites and have an embed code that can be used on any website. I would like to add following Social Features in OGV:-

When I talked about Online Geometry Viewer on mediawiki mailing list they were kind enough to share their views and the features they would like for the extension. One of those features was to have an image alternative for each model. We can use earlier described File Manager packages to either make user upload an image or another approach can be, if once loaded on any client we can use .toDataURL() method of canvas to get image from canvas or a combination of both.

Write a File manager so that users can see old files and view them.

Start working on model display part with three.js aka work on using three.js along with meteor.

Make Dashboard for users and admins

Allow users to embed models in their websites.

Automate Installation and Configuration of the app.

I have been in this community for a year. I have always been encouraged here to share Ideas without hesitation and other community members have helped me even If I ask or do something stupid. I love the openness one gets in this community and I have lots of friends here.