Use "eto" for the cup so that it will have more rounder edges and middle. Name it cup.s. Then after that, adjust the shape's width and set the D if you want to make the edges and middle more rounder. Click "Apply" then to put some color on it, make it into a region first and named it cup.r then go to the Combination Editor and input "53 20 0" (dark brown color) on the Color GUI. 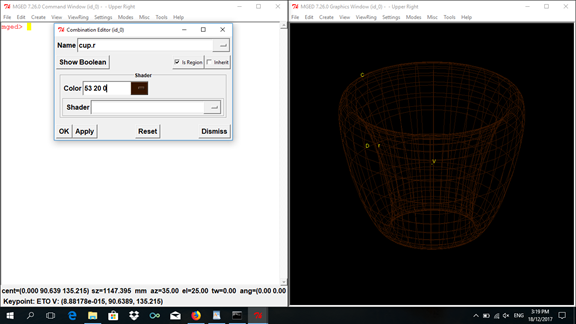 Create handle.s and use "pipe" for the handle so you can bend it to a more unique shape than the torus by clicking the "Append Point" then select the parts of the handle you wanted to add new points with. Adjust the new points to the desired shape and position by selecting "Move Point". The problem on this is that the adjusted points leave creases on the shape which gives it a rougher appearance and needs a lot of adjusments to lessen the creases. Do the same way on how put color on cup.r only name the new region handle.r.

To give it a white inside part, copy the shape of the outside cup (cp cup.s inside.s) and name it inside.s. Adjust its r, and Rotate C until it is smaller and thinner than the outside cup. The space inside of the cup might now looked too small for a cup and also that cup.r would hide parts of inside.s so make a region of cup.r and inside.s as follows: