Included in following is a brief article regarding a project from within our user community where BRL-CAD was put to use. It's a science project from three young ladies who, in the span of just a couple months, went from knowing absolutely nothing about modeling and BRL-CAD to creating a CAD model of their concept with rendered images and animations. Raquel, Marta, and Teresa used BRL-CAD for their project to model and visualize a space vehicle they designed.

The project is named “Projecto VeRDE”. Translating to English may sound strange as "Green Project", but in Portuguese 'VeRDE' is the abbreviation of “Veículo de Recolha de Detritos Espaciais." In English, this is a "Vehicle for Collecting Space Debris".

The idea behind the project is that planet Earth is surrounded by space junk that endangers astronauts and represents a very expensive risk to space infrastructures like the International Space Station (ISS), the Hubble Space Telescope, and other functioning satellites. The goal of this space vehicle is 1) to reduce the amount of space debris in Low Earth Orbit (LEO) and 2) to construct a “space truck” with environmentally friendly components and electronic systems that already exist in satellites and space shuttles.

The students conducted research on prospective vehicle components by surveying various space companies’ websites that sell materials to the National Aeronautics and Space Administration (NASA), the European Space Agency (ESA), and others for building their space shuttles and satellites. They discovered that there are already a variety of components available such as:

Using this information regarding available components, a concept vehicle design was constructed. The three high-school teenagers then worked on creating a representation of their concept within the BRL-CAD solid modeling system. Without any prior knowledge of BRL-CAD, but after going through the available introductory tutorials (even though they were in English), they were able to create a 3d model concept prototype with material shader properties defined. They then used BRL-CAD tools to render animation frames for a 360 degree spinning visualization.

In orbit, space debris travels at a very high speed that can be reduced with the help of lasers. This reduced speed lets the debris enter inside the space vehicle. Then, with the help of a treadmill, the debris can be clustered with a polymer. Afterwards the cluster of space junk will be sent to the sun (the incinerator chamber) thanks to the velocity that it gains from the treadmill plus the velocity of the vehicle. 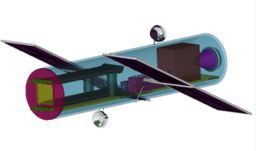 At a science fair in 2009 among 100 other projects, Raquel, Marta, and Teresa received an honorable mention for their project at the Electrical Museum in Lisbon, Portugal. "To create the design of our spaceship the BRL-CAD was a very useful tool to create our 3D model." - Raquel Albuquerque