An arbitrary convex polyhedron (arb) is a geometric solid that is completely enclosed by a set of 3-dimensional planes. Each has a set of straight-edged, flat faces/facets defined by those planes and their intersections. For example, a rectangular parallelpiped (rpp) is enclosed by six planes--two perpendicular/normal to the X-axis, two normal to the Y-axis, and two normal to the Z-axis.

Although any arb object could be defined and stored as an arbn, the arb8 record type is used to store all of the special-case arbs discussed below (that is, all except the explicitly arbn type).

Each box is enclosed by three pairs of parallel planes defined by a vertex [an (Xv,Yv,Zv) vector relative to the origin] and depth, width and height vectors [(Xd,Yd,Zd), (Xw,Yw,Zw), (Xh,Yh,Zh)]. Those vectors not only do not have to be normal to the X, Y and Z axes, they need not even be orthogonal (mutually perpendicular to each other). Thus, those vectors merely define the box's opposing faces as pairs of similar parallelograms. If they are parallel to the X, Y, Z axes, the box will have the same characteristics as an rpp (see below). 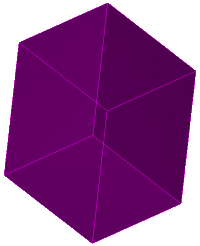 Each box is stored as an arb8 record whose eight vertices are calculated from its defining vectors as:

Each rectangular parallelpiped (rpp) is enclosed by two planes normal to the X-axis (mathematically defined by X=Xmin and X=Xmax), two normal to the Y-axis (Y=Ymin and Y=Ymax), and two normal to the Z-axis (Z=Zmin and Z=Zmax). The opposing faces of any such arb are thus pairs of similar rectangles. If Xmax-Xmin = Ymax-Ymin = Zmax-Zmin, as they are for the default rpp created by MGED's make and create commands, the resulting ppp would be a cube with edges parallel to the three axes. 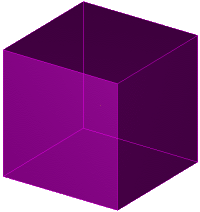 Each rpp is stored as an arb8 record whose eight vertices are calculated from its six planar coefficients as:

Note that the rpp primitive type is actually a special case of the box type. Thus, you can also create an rpp by specifying a box whose depth, width and height vectors are parallel to the X, Y and Z axes.

Handled by
in form(arb8)
Arguments
Vertex of first corner, direction vectors for height, width, and depth

creates the unit cube (first vertex at the origin, extends for 1 unit in x, y and z direction).

Special case of arb8, except with point 8 merged into point 5, making the left face triangular

Handled by
make in form(arb8) create
Arguments
6 Vertices in the following order: 1234 vertices for the front face, starting at bottom left, counterclockwise; then back edge is 5 on bottom, 6 on top. Top and bottom faces are triangles.
Example

The distances may be negative and are used when a face lies on the opposite side of the origin as the tip of its vector. An example is if the left side of a box lies on the positive X axis. In this case, because the left side is being defined, the vector points left (coefficients -1 0 0), but since the point is on the positive X axis its distance is opposite its vector and therefore negative. 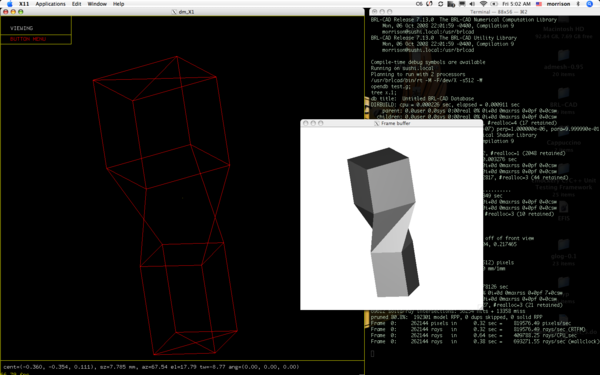